While Game of Thrones has enjoyed record ratings and a rabid fanbase, some of the events portrayed on the show have been divisive for fans of the George R. R. Martin’s book series on which the show is based. That’s because in many scenes, major events have gone down differently than they do in the novels. Here are just a few. 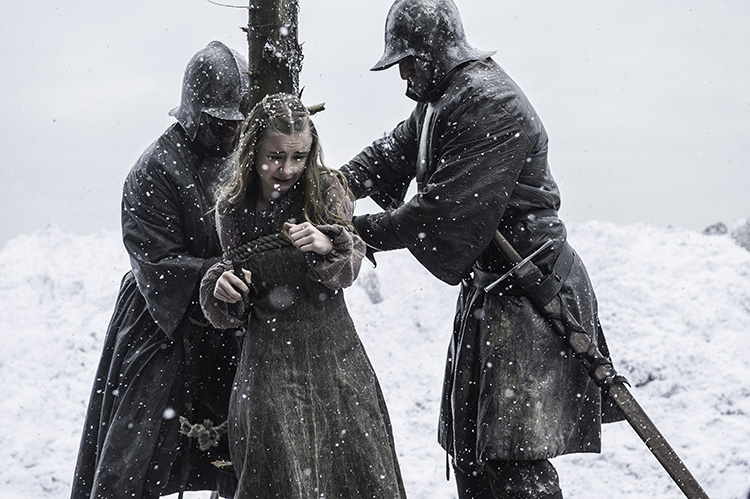 1. The Death of Shireen Baratheon
The tragic death sequence of Shireen Baratheon was one of the most talked-about scenes of Season 5. It was buzzworthy because of the depravity of her death, as well as because the death never actually happened in the books… yet? On the show, we see Stannis Baratheon’s burn his daughter Shireen alive, and he stood by as she screamed and begged for her life. In the book, this doesn’t happen, but fans are now wondering if the show is spoiling forthcoming novels? 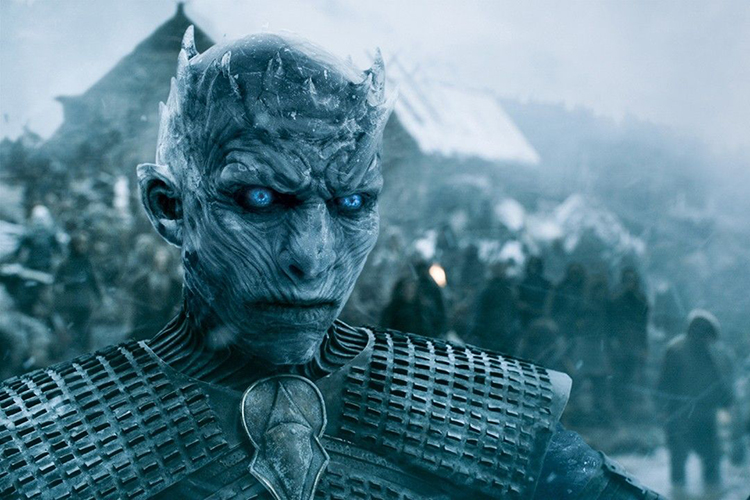 2. The White Walkers
These deceptive and horrifying creatures are one of the more mysterious elements of Martin’s mythology. In his book series, they are more often talked about than actually seen or heard. On the show, we meet the White Walkers early — in the opening sequence of the series’ first episode. Since then, we’ve come to see them often, and learn more about how they operate — including what they do with the kids they abduct as sacrifices. 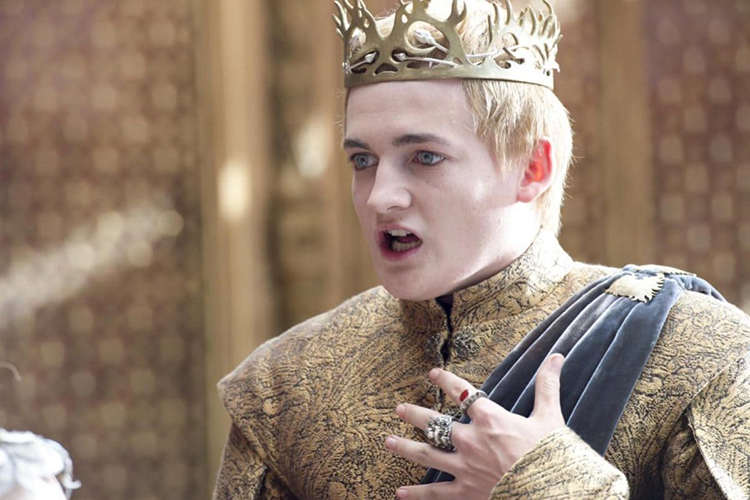 3. The Gruesome Details Of The Unexpected Death of King Joffrey
On the show, GoT producers spared us bloody specifics of what happened to Joffrey’s throat in an attempt to breath. All HBO viewers saw was his purplish face and a little blood. In the book, Joffrey claws at his throat in an attempt to breathe and it gets very graphic: “Joffrey began to claw at his throat, his nails tearing bloody gouges in the flesh. Beneath the skin, the muscles stood out hard as stone.” Glad we were able to use our imaginations on this one. 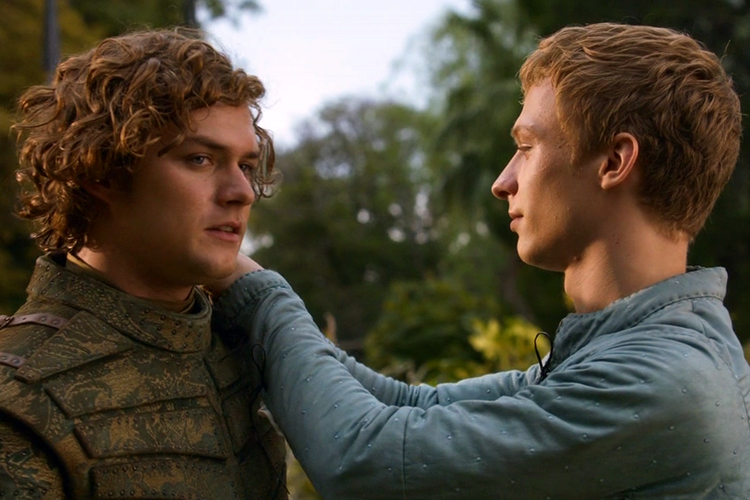 4. The Imprisonment of Loras Tyrell
In the book, Loras Tyrell is one of the greatest warriors in Westeros – he’s incredibly popular in King’s Landing. But when Cersei seems him as an enemy, she orders him to capture Dragonstone. Her hope is that the mission kills him which seems to have worked because the last we hear about him, it’s implied he was fatally wounded. On the show, Cersei imprisons Loras for his homosexuality. Loras’ sexuality is implied in the book, but never so pronounced as it is on the show. 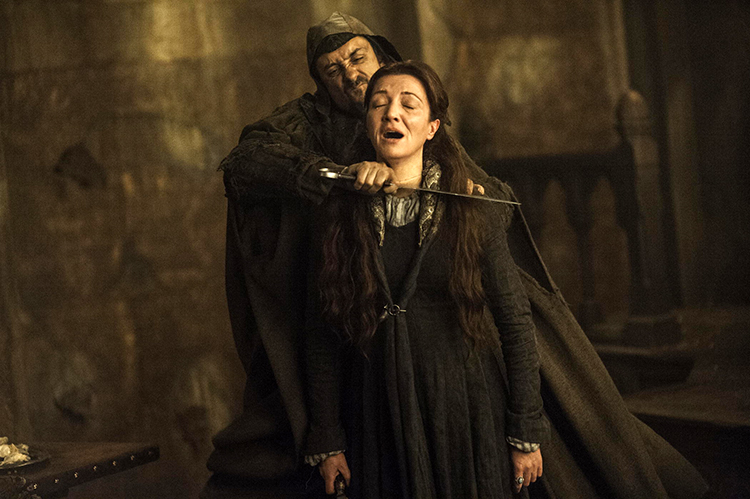 5. When Catelyn Stark Died On The Show, She Died
In the book, after Catelyn Stark is murdered at the Red Wedding, she is brought back to life by Beric Dondarrion, a disciple of the Lord of Light in the same style as Melisandre. He trades his life for Catelyn’s, who becomes a zombie-like creature called Lady Stoneheart who can’t speak. She is consumed by revenge, and even makes plans to execute Brienne of Tarth. On the show, when Catelyn dies, she dies. The Lady Stoneheart plot was never even shot, much to the irritation of the book fans. 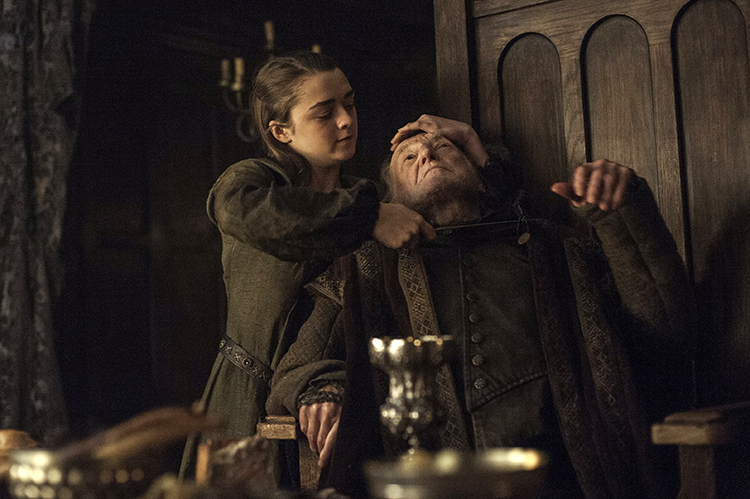 6. Arya’s Death List In The Book Is Much Different Than In The Show
In Season Two of the show, Yoren gives Arya Stark the idea of her death prayer in which she reels off the names of everyone she wants to kill, but in the second novel (A Clash of Kings), the list is Arya’s idea. If you go by the books, Arya’s death list is roughly: Ser Amory Lorch, Cersei Lannister, Chiswyck, Dunsen, Gregor Clegane, Ilyn Payne, Joffrey Baratheon, Meryn Trant, Polliver, Raff the Sweetling, Sandor Clegane, The Tickler, and Weese. On the show, her list is roughly made up of Joffrey Baratheon, Cersei Lannister, Walder Frey, Meryn Trant, Tywin Lannister, Melisandre, Beric Dondarrion, Thoros of Myr, Ilyn Payne, Gregor Clegane, and Sandor Clegane. 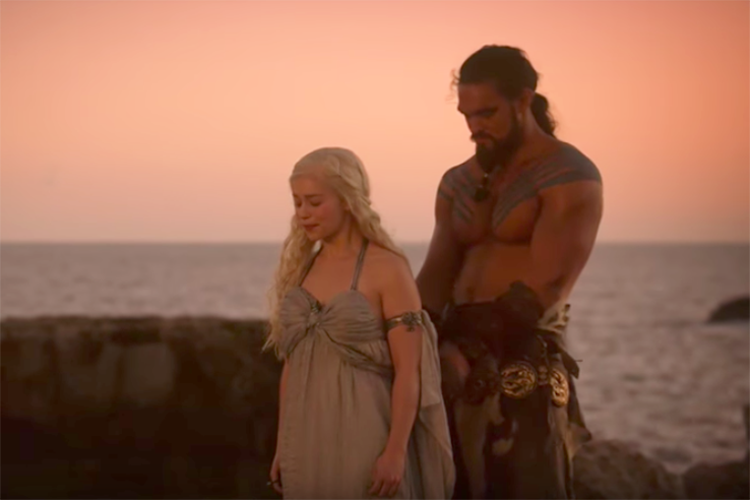 7. In The Book, Daenerys And Khal Drogo’s Wedding Night Isn’t The Assault We See In The Show
In the book, though Daenerys didn’t want to marry Drogo, it is clearly described that he managed to seduce her. Most importantly, he blatantly asks permission to have sex, and she says yes (without lying — it’s a point-of-view chapter so there’s no speculation and her thoughts are described). In Season One of the show, Drogo definitely sexually assaults her. 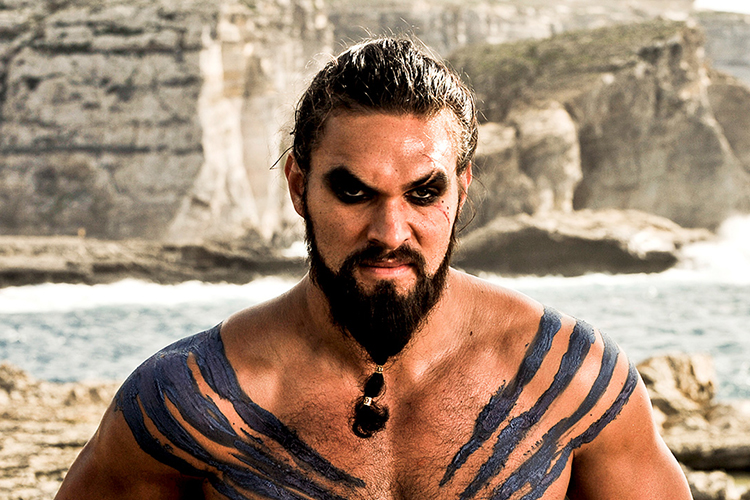 8. Khal Drogo Doesn’t Wear Bells In His Hair In Season One Like He Does In The Book
This might seem like a trivial detail, but it’s pretty important because in Dothraki culture, whenever a man wins battle, he adds a bell to his braid, and whenever he loses a battle, he cuts off his entire braid in shame. Khal Drogo’s hair length of is about right, but it isn’t braided as it is in the book, and it doesn’t have bells. The book said that Khal Drogo has never cut his braid, meaning he has never lost a battle. 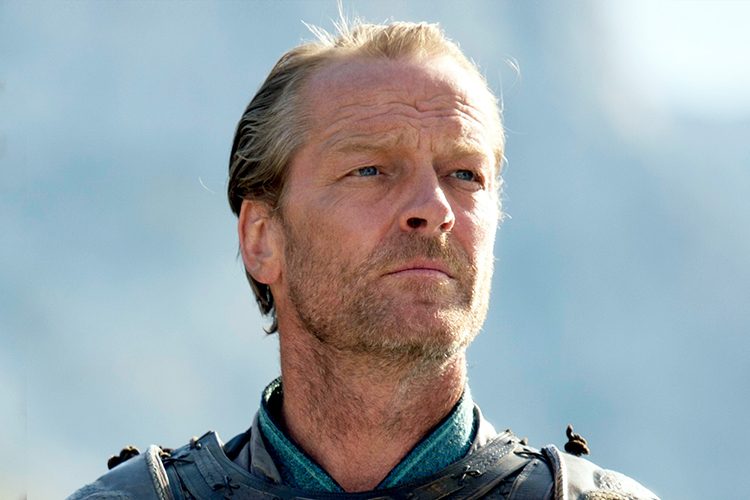 9. The Jorah Mormont On The Show Looks Nothing Like The Way He’s Described In The Books
In the books, Ser Jorah Mormont is described multiple times, in vivid detail, about being Daenerys’ “black bear” in reference to his black, balding hair, and his equally hairy body – an animal of a man. We get something a little more refined and gentlemanly in Iain Glen, who portrays him on the show. 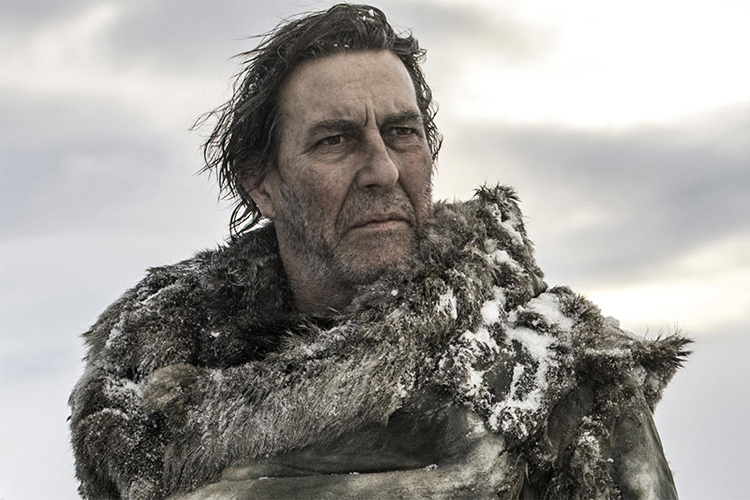 10. The Fate of Mance Rayder
In the book, as in the show, Stannis wants to execute Mance Rayder for not bending the knee, but Rayder and Melisandre conspire to disguise him as a wildling named “Rattleshirt,” and then send Rattleshirt to die in his place. Mance then goes on a mission to rescue Jeyne Poole (who he believes is Arya Stark). The mission works, but according to a letter from Ramsay Bolton to Jon Snow, Mance is captured and being held hostage. On the show, Mance is executed by order of Stannis, and there’s no indication that any magic saved him from his fate. 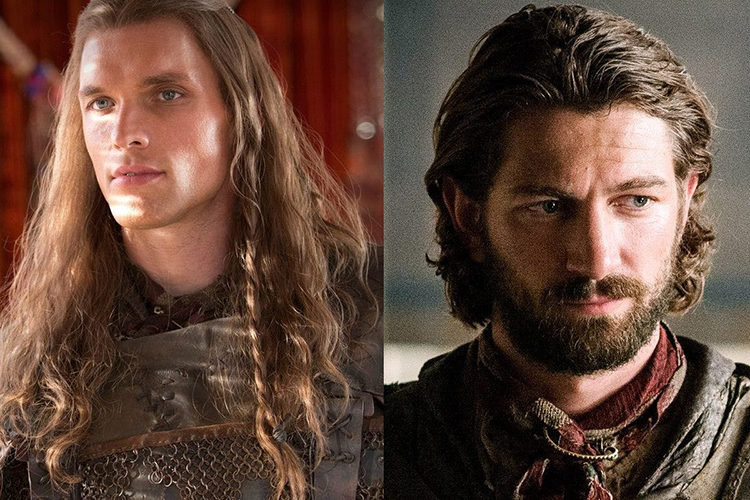 11. Daario Naharis Is Described A Lot Different In The Books Than He Is On The Show
In the books, Daario is far more flamboyant than he’s portrayed on the show (played by Ed Skrein on Season 3 and Michiel Huisman in Seasons 4 through 6), as his Tyroshi roots would dictate. By nature, the Tyroshi are known for coloring their hair bright colors and wearing garish, vivid clothing. In the novel “A Storm of Swords,” Daario is described as having a blue tri-tipped beard with matching long blue hair, a golden moustache, and a shiny gold tooth. 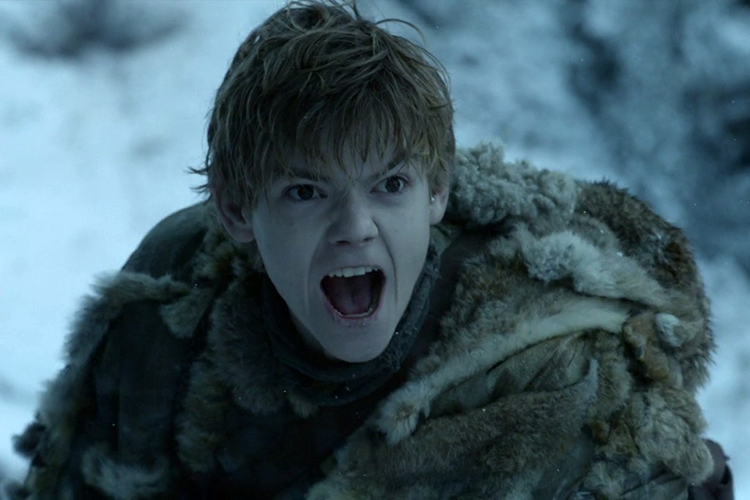 12. The Fate of Jojen Reed
On the show, Jojen Reed is fatally wounded in the attack by the Wights outside the cave. Meera then slits his throat in an act of mercy. She then burns his body to ensure he doesn’t come back to life. This is a big difference from the book, in which Jojen, a greenseer, helped Bran Stark escape Winterfell and escorted him on the journey to the cave of the three-eyed crow. His sister Meera helps him escape an ambush of white walkers outside the cave.