Jackie Cruz as Marisol “Flaca” Gonzales
Before Jackie Cruz played the Smiths-loving “sad girl” from the streets, she set out to make it in the music business. She was in a girl group called Krush Velvet, that had some successes but was never signed to a major label. She then began acting with her first role on The Shield in 2007. Cruz also appeared on My Own Worst Enemy and, soon after, met Kourtney Kardashian in an acting class where they had to kiss. That scene made it into Kourtney’s reality show, Kourtney and Khloe Take Miami.

Pablo Schreiber as George “Pornstache” Mendez
Before Pablo Schreiber grew out his now-iconic mustache, he got his first role with a bit part in 2001’s Bubble Boy, followed up immediately by roles in The Manchurian Candidate and Lords of Dogtown. He then landed reoccurring roles on The Wire, Dirt, Lights Out, A Gifted Man, Weeds, Ironside, and Law & Order: Special Victims Unit. But as long as he has that Mendez facial hair, he’ll remain “Pornstache” to OITNB fans.

Yael Stone as Lorna Morello
Yael got her big break way back in 1999 when she got a key role in the Australian-made feature movie, Me Myself I. That’s another thing — you may not be able to tell from Lorna Morello’s East Coast accent, Stone is Australian. Australians may also remember Stone from the mid-2000s medical drama, All Saints. She then went on to act in the Australian series, Spirited, before landing the role as Lorna on Orange. 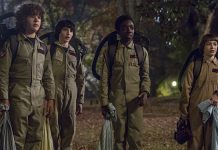